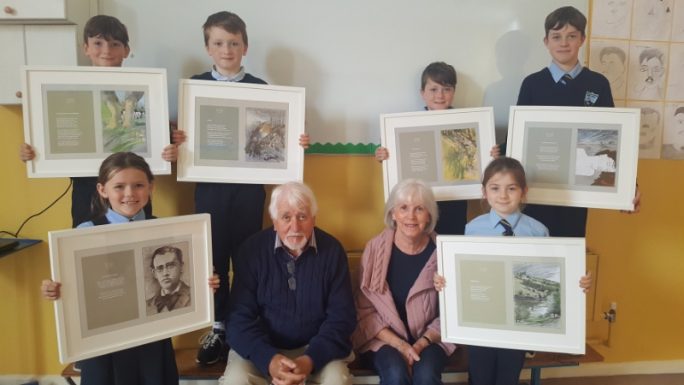 We received a fantastic donation of six framed Francis Ledwidge poems and accompanying paintings from Liam O’Broin at assembly this week. He was accompanied by his wife Margaret.

Liam, a local artist and sculptor and grandparent of sixth class pupil Cillian Brady in 6th class, had the art works on display in the parish hall last June as part of the Francis Ledwidge commemorations.

He explained to the pupils how he had painted one of the poems, Home, by reading the poem itself up to thirty times to understand the meaning behind it before painting his interpretation. Liam also told the pupils that his bronze sculpture of Francis Ledwidge will be unveiled in mid October in Slane village.

The poems have been selected for each class level from first to sixth to be learned by the pupils. We are delighted to have this resource for the classrooms and would like to thank Liam and Margaret for their visit to the school.