Slane boys played Kilbride in an old fashioned rip roaring end to end contest in Slane NS this week with Slane coming out on top. Kilbride were down a number of players as a result of confirmation the previous weekend and both teams agreed to play 14 a side as a result. Slane dominated possession with some lovely scores from Senan Duffy, Hugh O’Donnell, Hugh Ayres and Braydon Colfer among others. However, Kilbride struck back before the break with two well taken goals to leave nine points between the teams at the break.

The second half was a tough tackling affair with some tremendous blocking and tackling by both sides. Stephen Woulfe’s kickouts were excellent as was the defending of Matthew Kealy, Donnacha Hevey and Conor O’Gorman. Slane kept the scoreboard ticking over with scores from Altay Guneyer, Jason Reynolds and Ethan Harding.

The victory leaves Slane as runner up in the group with Kilbride in third place. Both teams go through to the quarter finals after the May week off. 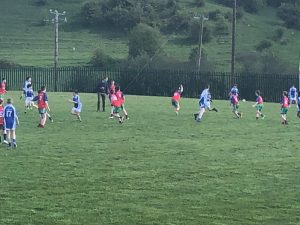 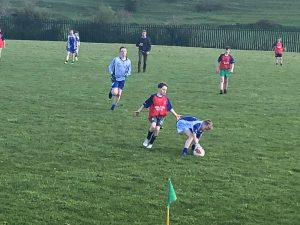