A fourth and fifth class combination of boys travelled to Kilmessan NS to play an end of season challenge match on their new school field. The pupils were very excited, and for many, it was their first full game for the school.

The game was very entertaining with many passages of very good football. Both teams were in blue so Kilmessan gallantly changed to a white strip for the match. Well done to all the pupils on a very sporting occasion. Mr. Mullins from Kilmessan and Mr. O’Donnell refereed a half each. The players were very polite and did not say who was worse. 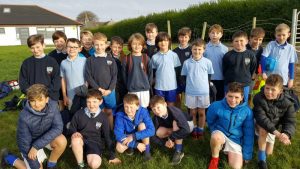