My Week with the Hens

Home > School Garden > hens > My Week with the Hens

My Week with the Hens

From Monday the 27th of November to Friday the 1st of December Ryan, Karen and I were responsible for looking after our school’s hens.

On Monday, Davy, our school caretaker, let out the hens. When the bell rang for the roll at twenty past ten, the three of us head off down to Mr. O’Donnell’s room. We knocked on the door but Sharron, our school secretary, said she thought he was on a call, and told us to come back later instead.

At half past ten, Mr. O’Donnell came into our classroom and told me to get the key to the hen house and Ryan to get the bowl for the eggs so he could take us out and show us how to do our jobs for the hens. I grabbed the key and hurried down the hall to follow Mr. O’Donnell and Karen, while Ryan was hurrying after me with the bowl.

Then he led us over to the gate. He opened the little latch and told us that it was very important that we always locked the gate after we went through, otherwise the hens would escape out onto the yard. He showed us how to unlock the gate and put it on the latch so it doesn’t get blown closed by the wind. He told Ryan and I to pull down the back of the hen house gently and take out all the poo and put it in the bucket. When we were finished that, we had to fill the bare gaps that had no paper in them up with paper from the blue bucket. While we were doing that, Karen was already at work scraping all the poo off the surface of the lid of where the hens lay their eggs.

When Karen had scraped off all the poo, we lifted up the lid of the egg box. There were ten eggs in total. We took them out carefully, holding them by the top and the bottom, and put them in the little bowl. Then I took the little bucket full of poo and the three of us emptied it into the composter. At first, we were trying to lift the top off of the composter until Mr. O’Donnell came over and told us we were supposed to take out the side and pour it in like that.

When we had poured everything into the composter, we went back to the greenhouse and took off all our gear. Then we took the eggs inside the classroom. Mr. O’Donnell showed us how to hold the eggs carefully and wash them in the sink with the blue paper under the cold water tap. When we washed the eggs, we put them in an egg carton and wrote a child’s initials and their class on the front.

Then Mr. O’Donnell told us that every day we had to ask Sharon for the money box for the hen money. It was a big, blue, heavy box that had lots of money inside. Mr. O’Donnell told us that every day if we got egg money Sharron would put it in the blue box. I was then our job to take the box off Sharron, count the money and write the amount in a little notebook.

Then Mr. O’Donnell took Karen off to his room and she signed all the sheets that we were to give sixth class. While they were gone, Ryan and I washed the rest of the eggs and put them in an egg carton for one of the junior infants. The bell rang for lunch, but we were finished cleaning the eggs so we could sit down with the rest of the class and enjoy our lunch.

That evening, I went home early and it was up to Karen and Ryan to lock the hens in. They thought that they needed the key, even though they didn’t, and got in a panic because they couldn’t find it. They eventually found out that they didn’t need the key to lock them in, and they headed out to do just that.

On Tuesday, I was back in school again, and in the morning Karen and Ryan told me how they couldn’t find the key the other day. I explained to them how Mr. O’Donnell took the key off me, so we headed to his room to retrieve it.

Mr. O’Donnell handed me the key and we headed outside to let out the hens. We did our jobs throughout the day until quarter to two, when Ryan and I went to the Junior Infant classroom to deliver their eggs.

We did the same for the rest of the week, but on Friday we were disappointed when we realized that it was our last day on hens. So at quarter to three when we were letting in the hens, we were clucking our goodbyes.

The three of us agreed that it was great fun doing hens, even if it was a messy job! 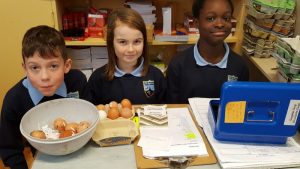