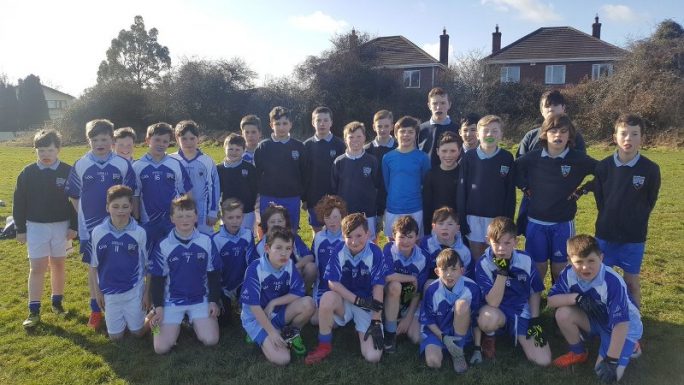 With both defences on top in the opening half, attacking returns were difficult to come by. Both teams traded long range scores, the home team’s coming from Ethan Harding, Hugh O’Donnell, Altay Guneyer and Senan Duffy. With two points between the sides just before half time, Altay struck a great goal but, following the pattern of the game, gaelscoil na |bóinne went immediately up the field and scored one of their own just before the half time whistle leaving two points between the teams at the break.

The game opened up somewhat in the second half. Slane got a grip of midfield for a period with Ethan Harding, Hugh O’Donnell and Senan Duffy dominating. This period resulted in two opportunist goals scored by Jason Reynolds. Then Gaelscoil na Bóinne replied with one of their own and stayed camped in the Slane half of the field. Matthew Kealy was outstanding during that period in defence, aided by Kevin O’Neill, the kick outs of Stephen Woulfe and a superb point blank block by Ciall Flynn. The game could have been out of reach for Gaelscoil na Bóinne but for two point blank saves from their goalkeeper. Slane hung on by the skin of their teeth to set up a semi final match against Oldcastle N.S.