5th Class were busy this week making soup from the produce in the school garden this year. Included in the mixture were potatoes, onions, leeks, turnips and some sweet potatoes that Mrs. Meade had grown in her polytunnel especially for the school. Mrs. Meade also bequeathed her magic recipe for soup and it is printed below.

Ms. Gerrard took over soup making duties from Mrs. Meade and produced a fantastic finished product. The pupils came to the staffroom and cut up all the vegetables. Many of them already make soup at home and 30/32 devoured the finished product. There was just about enough left over for the staff at lunchtime.

A few potatoes, one turnip, no more than two leeks and no less than one, a handful of onions and two fistfuls of carrots. 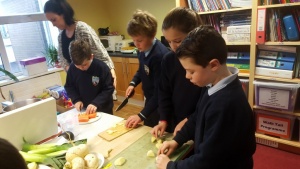 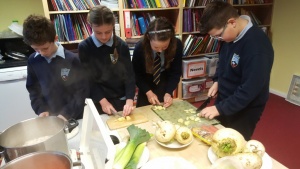 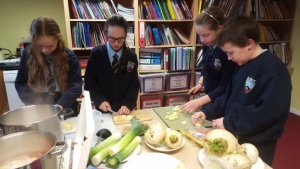 5th class were in the garden at the end of October to harvest the potatoes and beans. The broad bean seeds will be used as seed for next year’s crop and we will be planting them in the bottle greenhouse in early spring. Our potatoes produced a mixed result! Some were huge and looking great, while some others had a few worms poking out of then! The best learning experience was the potato which had blight. The smell of the potato was disgusting. Cue a history lesson on the famine! Some lucky pupils got to take the harvest home with them. 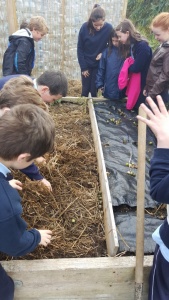 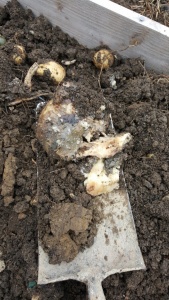 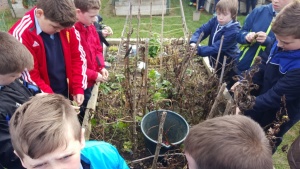 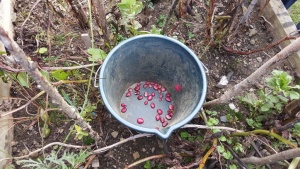 We received our prizes as a result of achieving Level 5 in the RHS school gardening scheme. Slane NS is the first school in the Republic of Ireland to achieve the level. With it came an array of prizes including presentation plaques €300 worth of garden centre vouchers, a microscope and vegetable growing book. Well done everyone!

Pupils from 4th and 5th class planted wheat at lunch break this week in one of the raised beds. The winter wheat is sown now and will be ripe this time next year. The pupils dug over the bed before levelling it off and sowing the wheat seed. It was a productive lunch time. Now it is time to sit and wait. 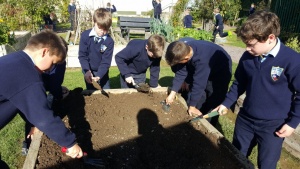 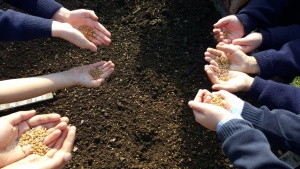 Last Friday during Golden Time, we discovered some caterpillars living in the school garden. There were lots of them on the broccoli.
On Monday the 28th of September we brought some of these caterpillars into our classroom. They are in a manmade habitat. They like to eat LOTS of broccoli; we think they are very hungry!

On Thursday we collected some more broccoli leaves for their dinner. As we walked under the willow arch into the garden we had to be extra careful as there was a caterpillar crossing the path!

Mr O’Donnell cleaned out their habitat and gave them even more broccoli leaves on Friday so the hungry caterpillars will have enough food for the weekend.

There was great excitement in our classroom today when one of the caterpillars escaped! Shane spotted it on the wall above the Autumn Tree! We went out for our lunch and the caterpillar crawled onto our Waste Free Wednesday sign. Kathryn kindly picked the caterpillar up and placed it back with its friends. What an adventure for our caterpillar!!!!

Second class are helping native Irish large and small white caterpillars by making a home for them inside to help them to eat enough broccoli leaves and change into chrysalises before the first frost this year. They are making a lot of poo at the minute!

Many thanks to everyone for providing plastic bottles for our greenhouse. We had an overwhelming response to the campaign and, last summer, put the final touches to the greenhouse. It means that we can now sow our seeds earlier in spring indoors and grow crops such as sweet potato, tomatoes and cucumbers. 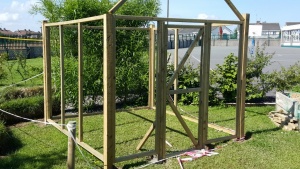 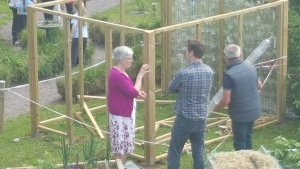 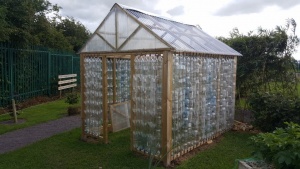