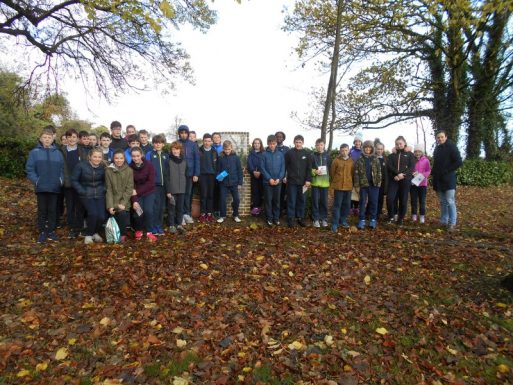 Earlier this month both 5th and 6th classes visited the Francis Ledwidge Museum. The following is a recount of the trip written by Eábha and Molly in 6th class.

On Wednesday the 7th of November, sixth class went on a trip to the Francis Ledwidge Museum. We left the school at 10.15am and we arrived back at 11.30am.

When we arrived at the museum a man named Paul came onto the bus to talk to us about the story of Francis Ledwidge and he told us what we would be doing inside the museum. Then we left the bus and he handed us a worksheet to fill in while we were walking around the museum.

The first room we went into was full of pictures and letters that Francis Ledwidge wrote and all of his poems. We answered some of the questions on the worksheet and went to the next room. The next room had lots of information about Francis Ledwidge fighting in the war. It also had a mini sculpture of the battlefields and trenches from the war. After we finished our worksheet, we went off to explore the rest of the museum!

The next room we went into was a kitchen. It was not like a kitchen we would have now. It had one small, stove, a table and some cups. On the table, there was a visitor log. We all got to sign our names in it.

The last room we went to was the bedroom. In the bedroom there was a small bed, but instead of a mattress it was a bale of hay. Beside the bed there was a nightstand and a jug and a bowl to wash his face. On the ground there was a pair of Francis Ledwidge’s shoes. There was a poem hung on the wall. Next, we went out to the garden and we learned that Francis Ledwidge went to the toilet in a small shed with sweeping brushes and buckets and lots of webs.

We walked up towards the garden and everyone got distracted because there were white doves on the other side of the fence. After looking at the doves, Mr. Fagan asked us to take a picture in front of a plaque with a poem on it. Soon after the picture was taken, we said goodbye, hopped back on the bus and drove back to school just after little break. We had a great day!